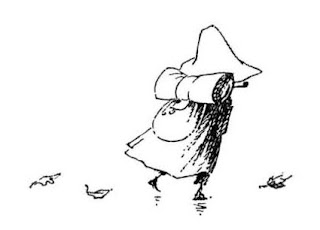 "But that’s how it is when you start wanting to have things. Now, I just look at them, and when I go away I carry them in my head. Then my hands are always free, because I don’t have to carry a suitcase."

Snufkin "Comet in Moominland"
Posted by Sunny at 22:01 No comments:

I am lucky to experience some of it. Honesty is rare, indeed.

10 things I’ve learnt since I moved to Finland

1)      Love for husband is stronger day by day.
2)   I can live colourful life even in super boring Finland.
3)   Discovering a new country keeps me sane.
4)   Learning a new language keeps mind sharp.
5)   To stay away from sausage sauce.
6)   I’m very much addicted to rocket/ rucola.
7)   To cook properly and can make  31 delicious dishes without setting the kitchen on fire.
8)   Friends are an illusion. They fled the moment I moved.
9)   Loneliness is tough. I am extremely frustrated at times.
10)  Frank Sinatra and Elvis Presley are the best at fighting back the blues.


Inspired by Being Brazen's 10 Things
Posted by Sunny at 22:54 No comments: 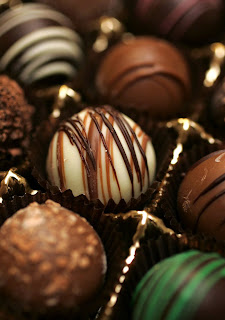 "Forget love - I'd rather fall in chocolate!"
Sandra J. Dykes
Posted by Sunny at 01:02 No comments:

The clumsy on the hill

Early morning. I put on my brand-new skiing suit, pulled on ugly rigit skiing boots, loaded myself up with skis and poles, climbed into a tiny overcrowded bus and drove to the Elbrus area. 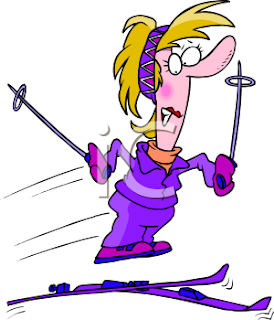 There an instructor took my group of newbies to a very small hill for beginners. He lined us at the foot of the hill and explained how to put on skis. That was a fun bit, because to lock a boot to a ski one had to insert the boot toe into the binding, then stamp the heel abruptly for the latch to snap the boot. Piece of cake! But the snow was so fluffy that the moment I stamped the heel the ski buried in the snow. I tried it a few times in vain and then decided to snap the latch with hands. I bent forward the latch, lost balance and collapsed in snow. Laughing came from other guys. Fortunatelly, I wasn’t the only one, who had such a cool idea.

As soon as everybody was ready, the instructor showed how to climb up the hill. Walking up the slope in the skis crosswise was easy on the one hand; and difficult on the other, as the boots were extremely heavy and not flexible. Somewhere in the middle of the slope we stopped and learnt the basic way of skiing called “to plough”. I did my best to ski down as slow as possible and kept weight between the skis all the time. Then we learnt how to turn and slow down. In an hour I felt like a pro!

I went to the top of the hill. From up there the hill seemed to be as high as the Everest and I was not as self-assured as at the bottom of it. Anyhow I collected my thoughts, stood in the plough, pushed aside with the poles and moved ahead smoothly. I thrusted my left shoulder, left knee and left ski slighly forward, they were followed by right shoulder, right knee and right ski. It was a perfect turn, when the skis suddenly accelerated. I failed to slow down, panicked and screaming AAAAAAAAAAA! at the top of my voice rocketed down the slope.

There were other biginners at the foot of the hill standing in a lovely semicircle. They were so busy with attaching their skis that could neither hear me yelling nor see me moving at the speed of lightning. I just had to do something to avoid a hit-and-run accident. When my feverish mind recovered, I knew what to do… I fell. At my speed it was an almost suicidal decision. I flew a few metres before sprawling right at the feet of the semicircle. Embarrassing! Some beginners freaked out and lost their balance; the others helped me to my feet. Thanks, guys! Nice suits!

I was really grateful to them, soft snow and the God for the happy landing. It may never have happened.

I went aside, caught my breath, looked at the top of the hill doubtfully and started climbing up…
Posted by Sunny at 22:48 No comments:

A good man one day found himself in conversation with God and so he asked Him:

My Lord, I'd like to know what is Heaven and what is Hell.

God led the man towards two doors, opened one and asked the good man to look inside. There was an enormous round table, in the middle of which was a massive bowl filled with food that smelled delicious. The good man felt his mouth water. The people sat around that table looked malnourished and ill. They all looked famished. They had spoons with very. very long handles attached to their arms, but since the spoon handle was longer than their own arms they couldn't bring the food to their mouth. The good man shook at the sight of their misery

God and the good man then went to the second door. God opened it. The scene that the good man saw was identical to the previous one. There was the same vast round table, the same large bowl that made his mouth water. The people sat around the table held the same spoons with the very long handles.Only this time they all looked well nourished, happy and were engaged in pleasant conversations with one another.

The good man said to God: "I don't understand"
"It's simple", God answered him, "These have learned to take nourishment from one another. The other ones, instead, only think of themselves.

Hell and Heaven are built in the same way. The difference lies within us".

Stabbed Skies and a Spell 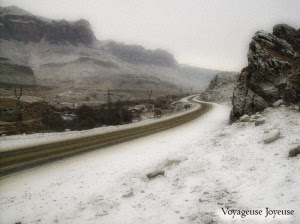 Early morning 5 o’clock precise. The train pulled up, I grabbed my gear and alighted from a warm train compartment into a freezing night. The bags got covered with rime at once. At the cold station I joined a group of fellow-passengers who headed the same way. We chatted over the options of how to get to the mountains. There were not many. We would either wait for a route bus until 11 am or hire a van. The locals, circling around like sharks, were offering so pricey rides that we hired the biggest van for all of us (10) and piled into it.

The van was really old and cold, creaked at turns and crunched so loud that I was afraid it would burst into pieces any minute. The fellow-passengers were very optimistic about a possible crash, laughed a lot at the matter, took pictures and finally fell asleep.

Soon the day broke and breathtakingly huge mountains merged out of the grey of dawn. Serrated ridges of them were stabbing the sky. It was snowy and snow seemed to be falling from those stab wounds. The road was narrow and icy. At some point there was a steep slope to the left and a precipice to the right, my heart sank as I could see the van flying into the river at the bottom of the precipice. Fortunately, it was just my fertile imagination.

As we were driving higher into the mountains I felt a bit dizzy and my ears got stuffed up, so I had to yawn strenuously to get them back to normal. And then a miracle happened: I instantly recovered and drowsiness was suddenly gone. The Elbrus sparkling at first light blinded me.

The highest (18510 ft/ 5642 m) mountain in Europe left me overwhelmed with emotions. The Elbrus’s tops, which the locals call Mother’s Breasts, were unbelievably beautiful! They bewitched me. That was the place I belonged! 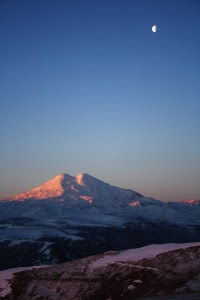 On The Sunny Side Of The Street

Sunny
A mom, a student, an amateur photographer; an expat in Finland.